GDS2019: Most consumers of cocaine support a fair trade and would be willing to pay more.

The war on drugs is dying a rather slow death. And while governments and their people reflect on what the next step might be, hundreds of thousands of people die every year from direct toxicity and violence, with many more having their health scarred and their life irrevocably harmed by criminal records. It’s a hard path to travel from zero tolerance to more libertarian, cost effective and humane drug policies. While the evidence that the way the world deals with drug use has for decades been wholly inadequate is overwhelming, ‘evidence resistance’ is rife. You’ve got to counter decades of rhetoric and international treaties. And you also have to accept that drugs like cocaine are not safe, they can be very dangerous, and several countries are seeing rising death rates.

Legalisation does not make dangerous drugs safe and with or without regulation, some people will become dependent, use too much and possibly die. It’s a tough call, but on balance we think (that the cost of the failed international drug control system and the national policies that implement it are far greater. If we look to the USA and the billions of green dollars being made on the back of a legal cannabis market, it is clear that there is one argument, that even a government rooted in antidrug policy find hard to counter. Money.

People spend more per gram on cocaine than any other drug, with a global average of €80 per gram. However, the majority of the economic gains don’t ever make it to the primary country of origin, Colombia. Coca leaf production in Colombia has reached record levels and increasingly diverse supply routes and multiple organised trafficking organisations have resulted in widespread availability and increased purity across the European market. The cocaine trade in 2019 is booming, it’s worth well over $100 billion / year and that does not take into account the costs of the war on drugs and the collateral economic harms on civil society and government.

The Global Commission on Drug Policy was set up by former heads of state and high-level former UN officials in response to the ongoing human costs of failed drug policies. They have put forward alternatives for control, alternatives that would help combat the harms to democracy and diminish the destructive power of organized crime that causes hundreds of thousands of deaths each year, the loss of opportunities for those caught up in gangs and the communities that find themselves powerless to harness the financial value of their crop.

Data from the last 5 years of the Global Drug Survey suggest that 75% of people use cocaine and most other drugs (other than cannabis) 12 or less times in the last year. These people tend to be otherwise law-abiding citizens, they have jobs, families, they may be into football, fishing, clubbing, yoga, they might even be vegan. But because cocaine is illegal, if they choose to use, they have little choice but to indirectly support organised crime, human trafficking and an illegal market. Based on anecdotal evidence and ongoing surveys with people who use drugs, most of them would rather this was not the case. Now it’s all well and good to say that people would rather not support a criminal, violent enterprise but that doesn’t stop most people from buying it. The question is: would people put their money where their nose is? Would people pay to support a regulated fair trade (ethically sourced) cocaine market? GDS2019 sought to find out. The answer was yes.

Almost 20,000 current cocaine users who took part in GDS2019 answered questions about whether they would support a regulated, fair-trade cocaine market. Only 16.7% were opposed to a fair-trade market. Of those who were supportive 85% would be willing to pay more, on average 25% more.

Findings from GDS2019 – would you support a legally regulated cocaine market? 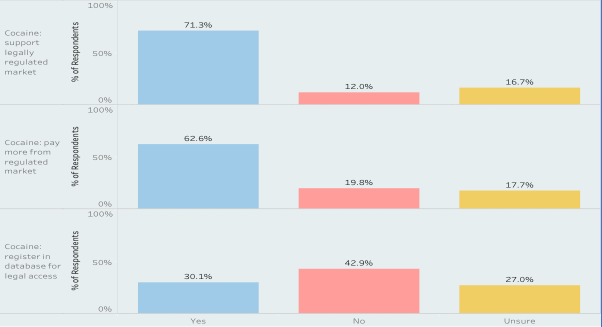 Although not everyone was willing to pay more, the current mean global price of €80 per gram still leaves lots of money that could be more fairly distributed to producers and local healthcare, education and social programs within producer and consumer countries. We shouldn’t be surprised that only 30% would be willing to register in a database to access a legal regulated supply, given cocaine is still rather stigmatised and most people don’t see their consumption as either medical or problematic, but it’s a start and helps us conceive of way to move forward.

The profit on a gram of cocaine from production in Colombia to point of sale in the USA or the EU is over 30,000%. With profits being used to corrupt, intimidate, smuggle and commit other, more high-impact crimes, and production done under less than optimal conditions, it’s fair to say that the profits that could be extracted are even greater. Our study suggests that users would rather pay more to help reduce the collateral damage from the war on drugs and support farmers and economies in producer countries. 25% of global cocaine revenue could build schools, hospitals and educational opportunities to support the growth of democracy and equality in cultivating and consumer countries. Consumers of drugs could offer the solution to many of the problems related to psychoactive substances, if only governments would give them a chance.