The time is ripe for honest conversations between the night time economy, police, licensing and harm reduction groups.

In mid-October I had the privilege of spending 3 days at the Amsterdam Dance Event where I was invited to talk at a number of panels on the issue of safer drug use and what the industry can do to help save lives. All in all, it was bit surreal. After all this was an event held in most of the most liberal and egalitarian of cities and where the population is credited with having common sense (canals without any fences or warning signs – in the UK we would not be trusted to just walk in so we’d have 6 ft. fences and neon danger notices). This massive event attracting over 350,000 people ran almost without a hitch or any serious incidences of harm. Open honest partnerships between the event organisers, the police, the Night Mayor, the city funded harm reduction organisation (Unity), on-site medical services, even extended to providing additional drug checking services for curious visitors. My talk offered some science behind old school, harm reduction messages and highlighted how most people who use drugs do so pretty sensibly and most importantly that safer drug use seems to be more enjoyable drug use. ADE could not run like this in many other cities. To their credit ADE know that drug use happens and that looking out for the health and well-being of people who attend their events is good for everyone including the sustainability of the industry. But voices from the industry are rare. B-Traits is one the few DJs who voices her support for rational harm reduction at events. Few others take the risk. Whilst dance venues, event promoters and their websites probably represent some of the best hubs to educate people about how to use drugs safely – none are permitted to have this discussion for fear of closure. Fabric shut its doors this summer after years of trying to comply with ever more restrictive requirements set by the council, police and licensing who wanted honest conversations closed down not shouted from the rooftops. In Amsterdam Fabric would have survived and been supported to do so.

While on-site drug testing will remain a niche offering, with limited access to the vast majority of people who use drugs, the ground breaking work done by the Loop this year in the UK in offering front of house drug testing at festivals has shown that such honest partnerships are possible outside the Netherlands. For those of us who have been in the field for a while it can be easy to forget that common sense harm reduction information is not always as easily available as it should be. While most people want to know how to use drugs more safely many won’t be bothered to visit drug education sites like ours. If that same information was available at the place they booked their club tickets and was offered without fear of prejudice, losing their license or closure imagine how many millions of people could be provided with potentially lifesaving and pleasure optimising information. GDS is blessed by its partnerships with industry media like Mixmag who have always worked with us and have been honest, credible and upfront about the relationship between music and drugs. This year GDS is asking promoters, DJs, those in licensing and the police to think about a world where we can all be a little more honest and how everyone would win. GDS thinks police and licensing should make it a legal requirement for venues and promoters to offer harm reduction advice on their websites and ensure all staff are trained in the responsible service of alcohol and to know how to recognise and respond to drug / alcohol intoxication. GDS would like to help- just ask. 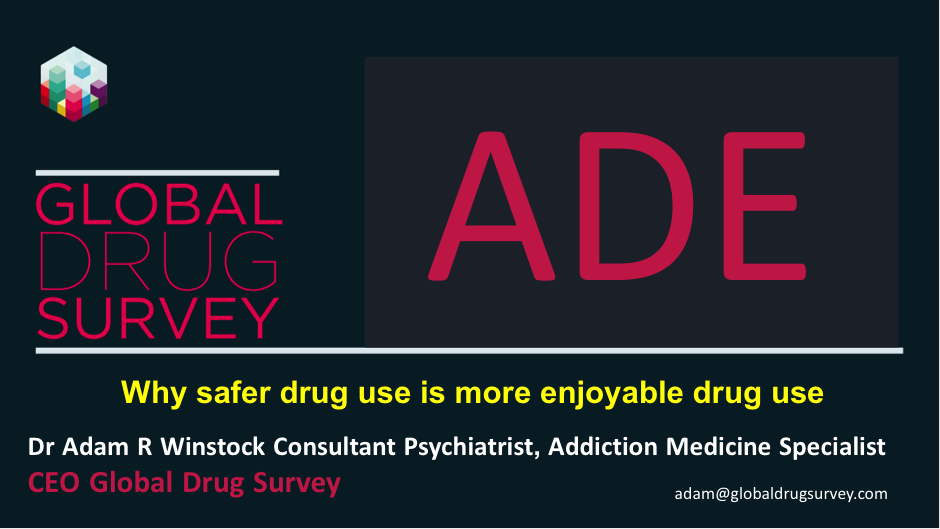 If you want to help us make drug use safer for people who like to party, please add your experience to the biggest survey of drug use in the world at www.globaldrugsurvey.com/GDS2017