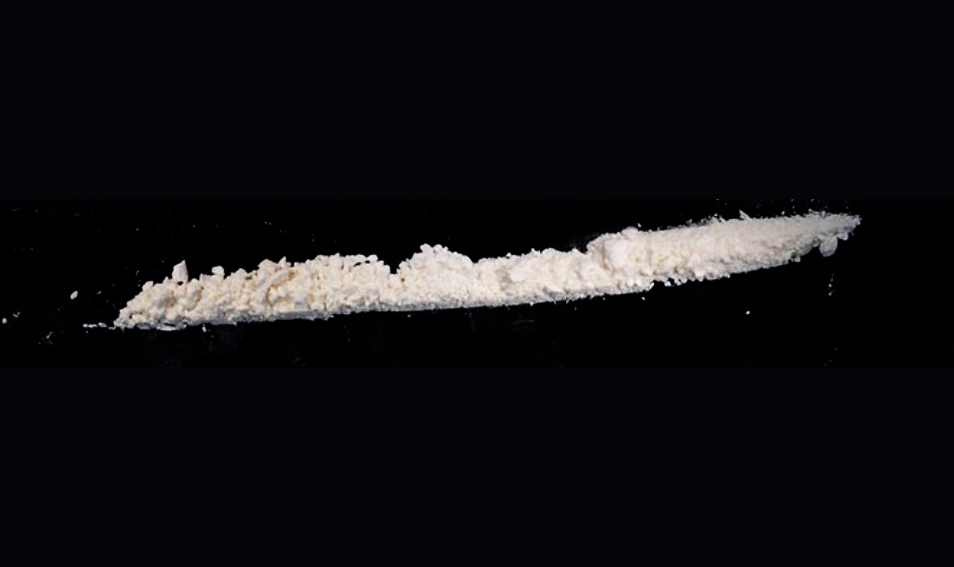 Why better quality / higher purity cocaine is not always better for your health.

Cocaine in the UK and elsewhere is getting better – but higher prices and purity come at a cost.

Cocaine powder once the drug of the wealthy and privileged is as common in the UK as Greggs or Boots and with the same appeal across the social classes. In many cities, you can get cocaine delivered quicker than a pizza. Cocaine is everywhere it would seem. GDS has been tracking cocaine markets in the UK and elsewhere for the last 6 years. During that time tens of thousands of users from across the world have consistently rated it as the world’s worst value for money drug (a score of 3-4/10 on average). In the UK for sure and Australia without any doubt (rating 2.4/10 last year). A few years back a £50 street deal of cocaine was not only usually well short of a gram (most street grams are between 0.6-0.8gm) but also had an average purity in 2009/10 of around 20% (and sometimes way less – think 2-5%). While rubbish cocaine (called ‘council’ cocaine in many areas) didn’t offer people much bang per buck, in terms of risk to the average user, low quality cocaine may have had its advantages. Accepting that most drug related harm (especially acute harm) is related to dose, lower purity cocaine, typically adulterated with inactive bulking agents (though levamisole can have bite in a small minority) probably led to people consuming less and hence exposed them to reduced risks of acute harms (due to lower blood plasma levels of cocaine) such as episodes or panic, anxiety, aggression and heart problems.

The typical profile for cocaine users from the GDS sample over the last 5 in the UK (and much of Europe) was someone who consumed cocaine or 10 or less days in the last year, got 10 lines or so out a gram and drank alcohol always or nearly always when they used. The percentage reporting that they had sought emergency medical in the last 12 months was stable at about 0.5 or 0.6%. That was half rate of cannabis and alcohol users and lower than MDMA. This low rate was replicated across most countries, with notable exceptions such as Brazil where high purity cocaine (75%) and fat lines (5 lines out of a gram) resulted in almost 5% of last year users seeking emergency medical treatment. In GDS2017 1% of over 20,000 cocaine users who took part in GDS2017 reported seeking EMT. A similar increase has been seen in the UK where the rates increased from 0.5% in GDS2015 to 1% in GDS2017 (see figure 1) 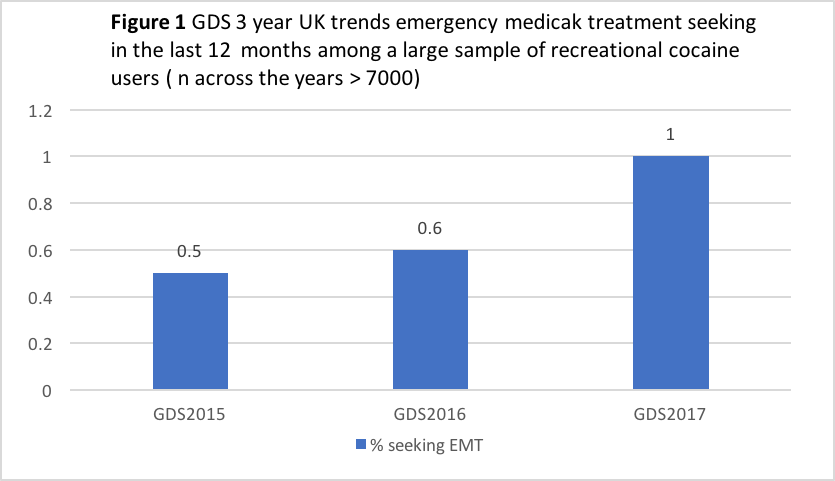 Facing a lot of dissatisfied customers and a potential threat from the myriad novel psychoactive substances the cocaine market started to change. The start of the decade saw diversification and growth not only in dominant supply countries, transportation routes and methods of importation but also in a fundamental rebranding and remarketing of what had been considered in most countries a unitary product.  Almost accepting that they had been providing a shitty product, dealers reinvented cocaine by offering the option of an upgrade. The existence of a two or three tier market where the offer of a better-quality product was promised in exchange for a higher price is now common across the world (see figure 2 from GDS2016 based on > 20,000 last year users). 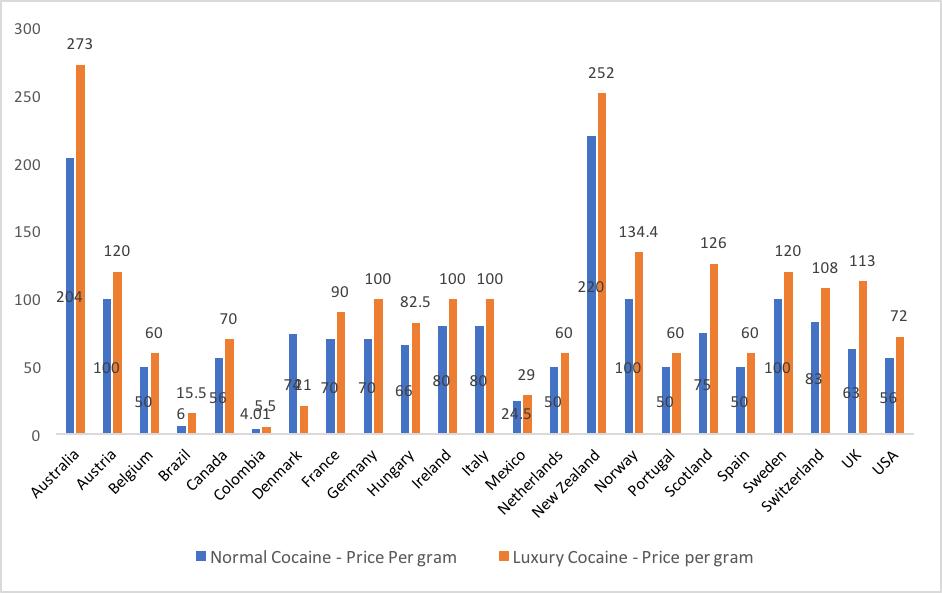 With the offer of a better-quality product demand has increased. In the face of increasing demand supply has increased. In the last 5 years, the average purity of street deal cocaine has more than doubled from 20% to over 40% (UK Focal Point on Drugs 2016 Report, see Figure 3). Seizures across the UK and EU are higher than ever. Although no doubt some ‘premium’ deals were better quality, according to GDS2014-2016 only about 60% of those who bought the higher priced product thought it was much better. In part that might be that for the first time in a decade the street purity of standard street cocaine is consistently increasing year on year. Even shitty cocaine in the UK now is 30-40%. Get your wallet out pay £100+/gram and you might be hitting 60%-70% or more.  It was a brilliant bit of remarketing that sat well with a society that says money gets you better quality things. And this increase in purity has extended across the whole cocaine market with the purity of crack cocaine in parts of the UK hitting 80%.

As we had already learned from Brazil, plentiful, good quality cocaine tended to lead to higher rates of harm. Higher purity cocaine leads to higher plasma blood levels with increased risks of harm (see figure 3). That harm includes the risk of developing dependence (money aside) since better cocaine could give you a better high, lead to you using more, thus leading to the development or tolerance and with that the need to use more to get the same effect. The idea that better quality drugs are safer is so appealing. But it’s not the case. High dose MDMA pills and high purity MDMA powder have not led to less MDMA deaths and fewer people ending up in A&E, in fact it’s the opposite. 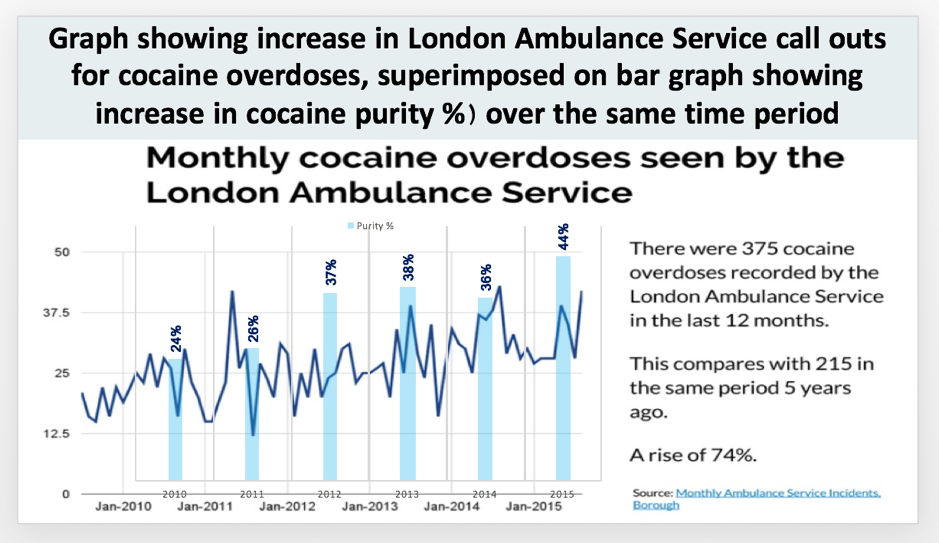 GDS is not the only group spotting the impact of higher purity cocaine on people’s health. Last year London Ambulance reported 375 cocaine overdoses during 2015 compared to 215 in 2010, a rise of 47%. Now while I accept that the GDS2017 UK sample of over 2500 ‘recreational cocaine users’ may not be representative of the wider powder cocaine community in the UK, it’s the biggest data set we have. And while almost 2/3rd has used on 10 or less occasions in the last year, the mean number of days of use was 17 with 6.7% having used 50 or more times. So yep, if you used cocaine every week you are probably in the top 5% of cocaine users in the UK (check out the cocaine drugs meter at www.drugsmeter.com or Google Play if you don’t believe me). And while most used 0.5gm/day, over 10% used 1.5gm or more. And compared to all the other countries we looked at, the UK had the highest proportion of people reporting that the frequency of their use had gone up in the last 12 months (38%), with over one in 3 users reporting they would like to use less.

I am not saying that rubbish quality, adulterated drugs are better for you. I am just trying to make the point that assuming better quality (higher purity) drugs are safer is not always the case. The real problem in that better-quality drugs should be safer to use. And the reason they are not speaks volumes about how current drugs laws in the UK in elsewhere nail shut the possibility of having honest conversation with people who use drugs. People don’t know the quality of drugs they are taking until after the event. Better quality cocaine, needs to be used more sparingly than rubbish cocaine. People need to know what they are taking and that cocaine taken in higher doses carries significant risks.  So the time you score a gram (well it will be a short gram) test dose it, chop it up very finely and instead of getting 10 lines get 20. Your cocaine will go further and you will reduce your risk of ending up in hospital!